Answer: It's a wolverine den, complete with an outdoor sun deck! A wolverine may have several dens in its home range and winter dens in the snow may have up to 150 feet of tunnels! Wolverines don't hibernate in dens like grizzly bears and black bears, but they use dens to keep warm and raise their babies. This den is likely a resting den where the wolverine spent the night and rested part of the day, sunning itself before heading out again in its endless search for food. Wolverines like remote wilderness lands and feed mostly on carrion, a fancy word for stinking dead animals like deer and elk that have died from starvation or been killed by other animals - not that wolverine won't kill a fresh one or steal it from another carnivore (meat-eater) like a grizzly bear. 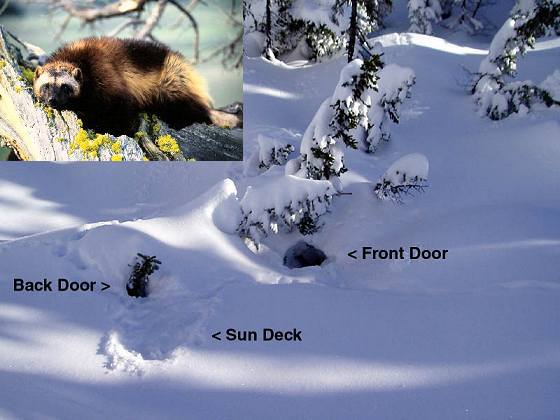